by Darlena Cunha
When taking toddlers out in public, you have a choice: you can have people laughing at you, or you can have them staring at you in annoyance.  I choose the former, as often as I can.  It’s been many months since I’ve been allowed anonymity anywhere.  Twins tend to attract attention, but even one toddler in an unlikely place will draw curious eyes.
People always start out enamoured (unless we’re getting onto an airplane).  It’s then my job to keep them that way, and not to let the situation devolve into one where shocked onlookers, unused to toddler antics, are forced to witness two babies being strongarmed out of a place in the football hold.  I’d rather people laugh at me than silently shoot mental daggers at me, so I look absurd a lot of the time.
One morning, the babies and I took a walk to the dumpsters where everyone in the condo complex is to deposit their garbage.  Getting there was easy enough, but the babies knew that naptime awaited them back home, and they were determined not to go back inside.  I walked a bit away, as if I would leave without them.  They laughed at me in their baby way.  I hid behind a truck.  Nothing doing.  Finally, I was able to get them engaged in a game where we had short races.
“Ready? Set? GOOOOOOOOOO!” We all ran and yelled go at the top of our lungs for a few paces, then stopped.
“Ready? Set? GOOOOOOOOOO!”  We did this over and over again all the way back to our townhouse.  We were loud.  We were funny.  My neighbor saw us and laughed at me.  It did not matter.  We got back inside the house.
Later that day, the babies and I went to the community pool.  As we were leaving, two young men sauntered in and laid out on the plastic sunning chairs.  I had already done the dragging-a-screaming-and-writhing-toddler-out-of-the-pool-area the week before, so I was determined to try a new approach.  I tried “ready, set, go” again.  It didn’t work, and I have a feeling nothing looks more hilarious than an adult woman making exaggerated running motions while yelling go at the top of her lungs all by herself.  I changed tactics and tried to get them to come with me to the mailboxes.  One of them tentatively started walking toward me, and I lavished her with loud garrish praise.  But when she saw her sister showing no interest, she tottered back to the bushes where they were picking berries.  I was defeated yet again.  I tried making their pool toys extremely interesting.  One took a look, grabbed a toy, and threw it to the ground.  At this point, the men sunning themselves were dissolving into giggles.  Exasperated, I walked across the lot, and to my surprise, the bushes there also had berries.
“Babies, look!  Berries!”
“Balls?” they asked.
“Yes, babies.  Balls.  Lots of balls.  Come over here.  Play with these balls.  My balls are better than your balls, just look!”
I was babbling; I looked ludicrous, but after 30 minutes of trying everything to get those babies to move, I wasn’t about to let this golden opportunity slide away – even if it meant I had to loudly praise the glorious attributes of my balls.
I can only imagine the reaction of onlookers because by this time my entire focus was on the twins.  It worked.  They came over.  Each new bush had better balls.  And we made our way back to the house where the best balls of all were waiting.  Acorns.
Before I had children, I would have shuddered at this reality.  I would have considered it a loss of dignity.  I would have said that children of mine would be well-behaved enough to simply listen to me when out in public.  I know now how naive that is.  I consider playing games like these as saving my dignity, in fact.  If people are laughing, they’re not judging.  If people are laughing, then my babies’ existence is not disrupting their lives in a negative way.  And when a parent is brave enough to go out in public, really, that’s all they can hope for.  I’d rather look foolish than desperate.
About the Author: Darlena Cunha is owner of the Tales of the Unlikely Mother blog at www.parentwin.com. She is (obviously) a mother of twins, journalist, novelist, editor, and blogger.

by Emily Pepka
Every single person I talked to told me the first year of raising twins would be the hardest. If I could make it through the first year, things would get so much better, they told me.

Well, I am here to tell you, those people were all liars. I survived my first year just fine. There were challenges. There were adjustments to be made. With 2 extremely premature babies, life was pretty busy and hectic that first year. But you know what...if I put the babies down, they stayed there. If I put them in a swing, they were happy and content for even a few minutes. They woke up every few hours, but they'd eat and go back to sleep.

And then they turned one. Soon after, they started walking. And soon after that, they were running. And before I knew it, I had 2 full blown toddlers. And let me tell you, TODDLERS are hard work.

Doing the simplest tasks has become such a challenge. I have to adjust and take into account the needs of not just one, but two, opinionated and picky toddlers. Meals are mass chaos. I can't even sit here quietly for 5 minutes typing up this blog post without a kid climbing on my head, 20 little fingers to swat away from the computer, and Yo Gabba Gabba blaring in the background because someone figured out which button is the volume button (just mount your TV as high as possible now, moms of multiples. You can thank me later).

I see pictures of friends with just one child, sitting quietly and reading a book, or painting a picture. That never happens at our house. I might sit quietly with one twin for a minute, but soon enough, the other will require something different, or will distract the quiet twin. Suddenly, a quiet moment turns into a crazy fight over a truck. Please note, we have probably 4 of the exact same truck. None of them are as good as this ONE truck though.

Now I'm sure there are similar challenges with siblings, but with 2 different ages, I'm sure you don't have two naked kids running around your house, peeing left and right while you try to potty train them. And with that, I think I will potty train one at a time. Let's start with my daughter. Then let's hope I have enough patience left to potty train my son so he's not in diapers at 4.

All of that is hard. When they run in two different directions at the park things get a little frantic. But our biggest challenge yet is keeping the house safe and toddler proof. I have two very bright children. I am very blessed. They are smarter than they look though, and with one urging on the other, things very quickly get out of control. 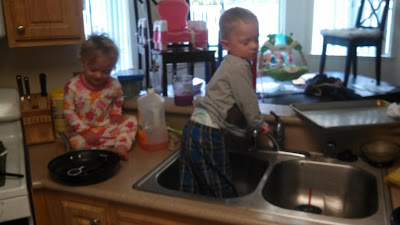 That would be 2 children sitting on top of the kitchen counter after using the oven to climb up. And why yes, my chairs ARE on my dining room table in the background from a previous incident involving the chandelier. I can't let my children out of sight for a second. I don't take showers anymore. You don't have to sit too close to me, I understand. The knives are now in a drawer that is locked and far out of their reach. The oven is also now locked with a new lock that they haven't figure out. Yet. Feel free to contact me for any tips on good locks for your drawers, cabinets, and appliances. I have a lot of experience. When a vending machine full of child proofing gear at a hospital gets you excited, you know you have a problem. And the vending machine is at CHLA, for those interested ;) and the locks and things are actually cheaper than you'll find them at Babies R Us. I digress....

So let me be the honest one who tells you, the first year is definitely not the hardest. I'm sorry if this is bad news for everyone waking up with their newborn twins at 2am...and 4am....and 6am. But while they are a challenge and make me want to rip out my hair frequently, I wouldn't want it any other way. They make me laugh constantly and have shown me the joys in all the little things in life. They cheer for me every time I enter a room or do a dance (what a self esteem boost!). They're each others best friends. And at the end of the day, when they are finally asleep, while I'm lying there exhausted and partially bald, I miss my crazy little twins and can't wait for the adventures the next day has in store.

About the Author: Emily Pepka is a proud Air Force wife and mom of twins. Her boy/girl twins were born in June 2011 at only 27 weeks. Her blog, Twice the Miracle (http://twicethemiracle.blogspot.com) documents her family's life through the NICU and beyond. In January 2013, Emily and her husband welcomed a full term healthy singleton baby boy. The Pepka's are currently stationed at Los Angeles Air Force Base, volunteer with the March of Dimes Family Teams Committee and are members of the Beach Cities Parents of Multiples Association (www.twinsclub.org).
Posted by BCPMA South Bay at 7:30 AM 1 comment:

Looking for a specific author or topic?

What is Multiples Voices?

Multiples Voices is a virtual home for multiples and parents of multiples to share stories and experiences unique to life with twins, triplets and more with one another and the larger community in which we live.

Multiples Voices is a volunteer production of the Beach Cities Parents of Multiples Association (BCPMA), a non-profit organization located in the South Bay of Los Angeles County.

We welcome submissions from all types of writers and bloggers. Preference is given to members of BCPMA, SCMOTC and NOMOTC, but we will consider all submissions. No pay. Byline given. Links, photos and bios welcome.

Opinions and stories belong to the authors themselves and do not necessarily represent the BCPMA, SCMOTC or NOMOTC.

For more information on how to submit and the type of content we seek, click on "Multiples Voices Submissions."

Readers who comment, we love to see what you have to say!

But, please remember to be mindful and respectful of our writers.

Discussions and comments are welcome and encouraged, but personal attacks and inconsiderate language will be removed.